Interview with nuncio Marco Sprizzi, Part 1: ‘My priority is to be more transparent and accountable’ 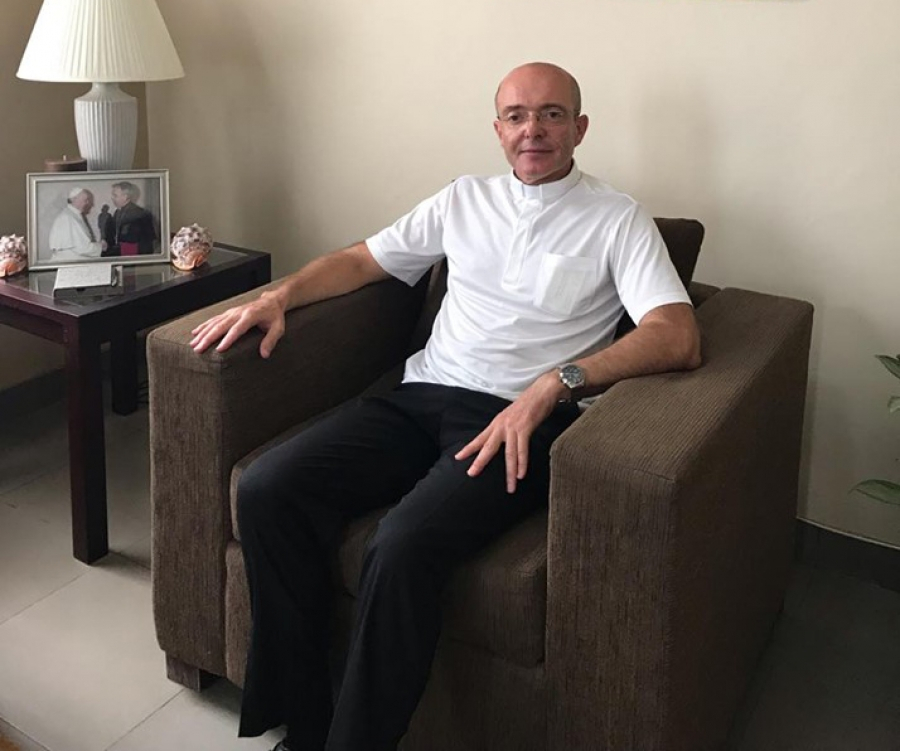 ‘I love this place. I love the people,’ tells Monseigneur Marco Sprizzi about Timor-Leste. Two years ago, in January 2019, he arrived in Dili. He is acting nuncio, the Vatican’s ambassador, for Timor-Leste and Malaysia. Early 2021 the new permanent nuncio takes office.

Monseigneur Sprizzi divides his time between both countries, though he is mostly in Timor-Leste. In an exclusive interview with TempoTimor he talks about a subject that usually is considered a delicate matter: finances.

TempoTimor publishes the interview in a series of four articles:

Part 2: How is the church in Timor-Leste financed

Part 4 – The financial position of the priest

Timor-Leste is one of the few countries in the world where the government is directly funding the work of the catholic church. The financial support is specified in the Concordat, the legal framework for relations between the Democratic Republic of Timor-Leste with the Holy See and the Catholic Church, which was signed on 15 August 2015. ‘Article 11 of the Concordat says that the government contributes every year to the work of the church, with a financial contribution that is in accordance with the financial possibilities of the state,’ explains Monseigneur Sprizzi.

On 13 November 2020 prime minister Taur Matan Ruak signed an agreement stating that the Timor-Leste government provides this year 5 million dollars to the catholic church. Previously these contributions have been as high as 15 million dollars.

According to the Concordat the state funds will have to be spent according to a fixed division: 50 percent for education (schools, teachers’ salaries); 25 percent for social projects (such as health care, support for disadvantaged persons, children and elderly persons); 15 percent is for supporting the church itself (money for the dioceses, buildings etc); and 10 percent is allocated to the overhead for managing the state’s contribution received by the church.

The right of the people

When Monseigneur Sprizzi arrived in Timor-Leste he noticed there was much improvement to be made in the management of project proposals and state funds. ‘My priority was to be more and more transparent and accountable,’ he says, adding: ‘This is the right of the people. Because this money belongs to the people, and it is spent for the people. The people have the right to check. They have the right to know until the last cent’ how the state funding is spent by the church.

How does the process work?

In the first phase project proposals are sent to a special commission at the diocese. ‘These commissions are mostly made up of lay people, but priests and representatives of religious congregations also take part. Mostly people are chosen for their expertise in various fields,’ Msgr. Sprizzi explains.

Once approved at diocese level, the proposals are sent to the national commission, which evaluates each single project. The overview with approved projects is sent to the bishops. Once the bishops approve the final list, the Nunciatura presents the project proposals and the budget to the government through the ministry of foreign affairs. Then the cabinet of prime minister studies the report. ‘They decide how to implement the proposals in the national budget,’ says Sprizzi. Then the government sends the approved project proposals to parliament, which approves the list or not. In the end the bishops conference provides a financial record to the government.

Monseigneur Sprizzi has worked on improving the list with projects that is sent to the government. It has transformed from a document of just eight pages to a massive report with detailed financial information such as receipts. ‘This has become a huge report, which has been compiled by people working for the church,’ the nuncio explained. But as the reporting becomes more intensive, next year an independent auditing company will do the work. It will produce a certified financial report, including photos and receipts of the projects. ‘This will give even more guarantees of transparency and accountability,’ Msgr. Sprizzi says.

Some congregations have complained that not as many of their projects have been awarded with funding compared to previous years. But Msgr. Sprizzi says that more than 50 percent of the financed projects are initiated and managed by religious congregations. ‘Of course,’ he says, ‘those who feel they are excluded always complain. They think they are mistreated.’

The system is more fair

But the nuncio thinks that the current system is more fair than in the period before the Concordat was in place. ‘Powerful religious congregations here in Timor-Leste had special links with political leaders, who were often their former alumni or were related through family,’ the acting nuncio explains. These congregations were well positioned and knew better how the system of project proposals worked. ‘I am very good friends with the Canossians. They are very powerful and spread over Timor-Leste and know everybody. They had a habit to negotiate directly with the government for financing their projects. They had good channels to do so,’ Msgr. Sprizzi explains.

But that was not the case for all organisations. ‘The small congregations had no special connections, no alumni and no family links, because they come from Indonesia or South America,’ the nuncio explains.

Now the method for including proposals has changed. Currently the impact of a project is measured before a proposal ends up on the church’ list. Whether the proposal comes from a bigger or smaller congregation is not relevant. It’s about the quality and the impact.

‘Some bigger actors that were used to receive a lot of money, are now receiving less,’ says Msgr. Sprizzi. ‘For me it is not bad news,’ the acting nuncio states. ‘The good news is that we are working in a more rational way.’ He spoke with the congregations that were unhappy. ‘I ask them to come to me or the bishops, and specifically describe what was not done well, and if necessary, we try to correct it.’ Msgr. Sprizzi is satisfied with the new developments. ‘Many are understanding,’ he says, ‘I think we are going in the right way.’