Priest dismissed for sexual abuse of children in Oecusse Featured 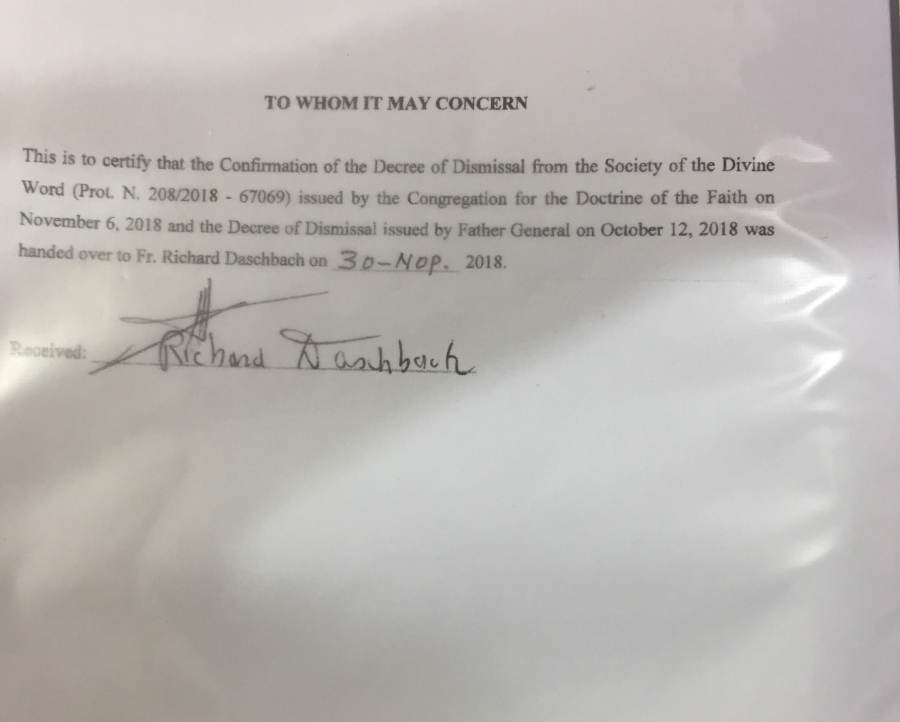 by Jose Belo and Tjitske Lingsma

The Congregation for the Doctrine of the Faith (CDF) at the Vatican has dismissed Richard Daschbach from priesthoodafter accusations that he sexually abused children who were inhis care in Oecusse, Timor-Leste. This was confirmed to Tempo Timor by Father Jovito Rêgo de Jesus Araújo, Episcopal Vicar for Pastoral Care of the Diocese of Dili. It is the first time that a case of sexual abuse of minors by a member of the Catholic clergy has come to light in Timor-Leste. Daschbach confessed his crimes to his congregation Societas Verbi Divini (SVD, Society of the Divine Word), but then went back to his community where he allegedly committed the abuse.

Daschbach, an American originally from Pittsburg, USA, arrived in 1966 on the island. In 1992 he established the TopuHonis Shelter Home, which has two locations in Oecusse. https://www.topuhonis.org/ According to the organisation’s website it is ‘a safe haven’ for orphans, children ‘from extremely poor homes, disabled adults, and women fleeing abuse.’ Topu Honis says it provides health care, food,schooling, ‘shelter and safety’, sponsorships for education, employment opportunities and cultural preservation. Over the years it ‘has served more than 600 children and adults in the area,’ the website says.

Behind the scenes however, there was another reality. In the orphanage of Kutet girls were allegedly sexually abused byDaschbach, says Fr. Yohanes Suban Gapun, SVD’s regional superior based in Dili. When early 2018 the congregationreceived information with accusations of sexual abuse, the head of SVD in Rome sent an email to Gapun, who was asked to go to Oecusse and take Daschbach to Dili. While the congregation investigated the case the priest was suspended and forbidden to perform his priestly celebrations. During aphone conversation with the superior general in Rome Daschbach confessed. ‘It is100 percent true,’ Gapun heard him saying. ‘He repeated that four times.’

The case came as a shock. ‘We never expected this from a man who dedicates himself to the people. He is like the father of that community, which he built, nourished and supportedwith all kind of help. (…) This is a real disaster. A drama. A very dramatic situation. An old man of 82 years being accused of paedophilia,’ says Fr. Jovito.

Tempo Timor contacted Daschbach, but he did not answer the phone.

Meanwhile criminal investigations are underway, which means that potential victims and witnesses and their identitiesare protected by the law.

SVD’s leadership had told the priest to stay in Dili. However, on 19 August 2018 without authorisation from his superiorsDaschbach left the SVD premises. He went back to Kutet in Oecusse, where he stays until now. Just before his departure the priest said he would resign from the SVD congregation.

Meanwhile the Catholic Church institutions continued theiradministrative penal process. The SVD dismissed Daschbachas its member, explains Gapun. When it comes to allegations of child sex abuse, The Congregation for the Doctrine of the Faith (CDF), which is located at the Vatican, deals with these cases. In November 2018 the CDF issued a decree thatDaschbach was officially dismissed. Fr. Jovito: ‘He is not a priest anymore. We prohibited him to celebrate in the community and we asked the people not to accept his celebration.’

The Catholic Church in Timor-Leste has not yet informed the population about the reasons why Daschbach has beendismissed and became a layperson. ‘In a general sense we told the people that he committed a crime that is not absolved by the Catholic Church in Rome, and that he is expelled from being a priest.’ When asked whether the Diocese is planning to publish the decision and the reason for the dismissal, Fr.Jovito says: ‘I am not a decision maker. But I think people are supposed to know. The Vatican already reached the final decision for a priest who committed abuses like that.’

On 30 December 2018 Fr. Jovito went to Kutet to prevent Daschbach from performing mass. ‘But when I arrived he hadcelebrated already. I was mad, because he already got the letter from the Diocese that he was not allowed to celebrate. I told the people: if you want to help him, better not to come to his celebrations. He is not considered a priest anymore. He accepted the accusation, and signed the letter with theaccusation about the wrong misleading behaviour that he committed.

With Daschbach refusing to follow the Catholic Church’s rules and penalties, the Diocese is now contemplating further steps. ‘He needs to be arrested,’ says Fr. Jovito, adding:‘Maybe we need to send him back to his home town or to Indonesia, because he was a missionary in Indonesia for many years. He committed a crime. He should not be allowed to be in Timor-Leste.’