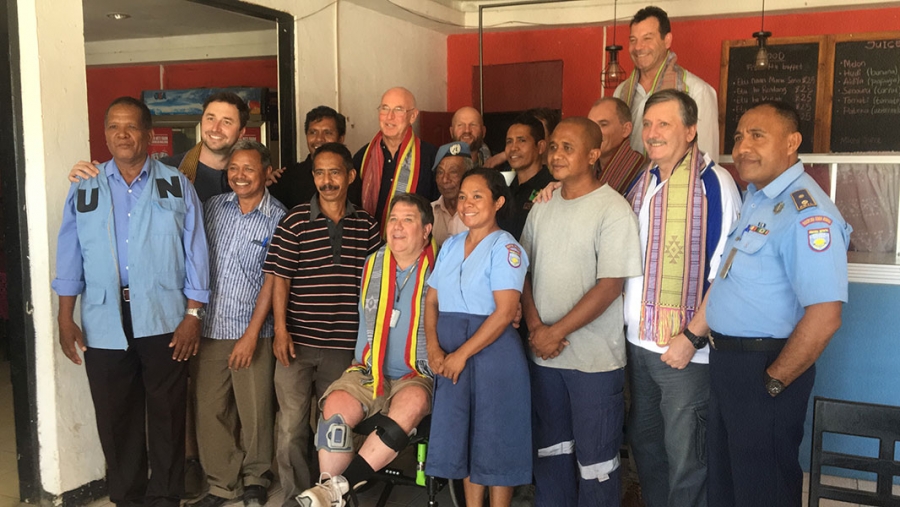 Former Unamet colleagues meet in Maliana. With David Savage (former CIVPOL) in the centre, Ian Martin (former Unamet-chief) standing behind him and Ms Mutumali who is now a PNTL-commander in Maliana standing next to him. (27 August 2019 - © Tempo Timor)

A group of former international UNAMET staff returned to East Timor to celebrate the 20th anniversary of the referendum. One of them was David Savage, an Australian policeman who in 1999 was based in Maliana. He reflects on the past and the importance of his last visit. ‘It was the best thing that happened to me in years.’

‘When I heard last year about the celebrations, I decided to go to East Timor. Nobody thought I could make it. But I trained hard for months to be able to come,’ tells David Savage, while sitting in his wheelchair sipping a cappuccino in the garden of his hotel in Dili. Just before flying back home in Australia, he reflects on his 12-days trip to East Timor during the commemorations and celebrations of the historic referendum in 1999, when he was an Australian civilian police (CIVPOL) with UNAMET, the UN mission that organised the vote. ‘No country is probably less accessible for people in a wheelchair,’ he smiles. Many offices, houses and hotels in the young nation have stairs and steps. Most pavements don’t have long smooth surfaces and lack ramps. ‘But when necessary, my friends carried me. And that’s quite something, because I am not light,’ he says jokingly.

During his visit Savage was joined by a group of five other ex-CIVPOLs, two former international UN-staff, journalist Mark Dodd and Australian diplomat Sweetman. ‘Twenty years is enough time for reflection,’ he says. Still some had been anxious. One of the cops wasn’t sure 1. But already in the plane from Australia to Dili, the Timorese passengers applauded and welcomed them back to East Timor. It was the start of an emotional visit with many meetings, reunions and encounters that healed trauma and old wounds. ‘We were welcomed with such big affection. It has been brilliant on all levels. It is hard to put it in words. We are very normal people, but we felt like rock stars. It is the Timorese who make us feel that way. For just a tiny part of their struggle we were there to help, but we understand it is really appreciated.’

Back in 1999 the CIVPOLs were formally tasked to advise the Indonesian police on security during the preparations of the referendum. Savage was based in Maliana, a town in the west of East Timor near the border with Indonesia. Immediately after arriving he and his UN-colleagues were confronted with massive violence and intimidation by Indonesian security forces and East Timorese militia to force the population to not vote for independence, but for autonomy within Indonesia, that was occupying East Timor for 24 years. ‘When we heard about an attack on a village, as CIVPOLs we would go and check it out. Soon we became a roving unit that went to all the incidents and wrote reports. We became a thorn in the side of the Indonesian police,’ Savage tells. He and his team felt heartbroken to see the suffering of the Timorese people, and experienced insecurity themselves as well. ‘Many of us have been on other missions abroad, but we never felt as scared as during UNAMET. We were unarmed and didn’t carry any weapons. There was no back up system like in other missions exists in case something would happen to us. There was no medical aid. There were no peacekeepers. We were being threatened and shot at. We had secret documents in which the Indonesian military stated that they want to increase the intimidation and scare off the mission, to the extent of even killing a few international UN staff. We lived in fear and felt vulnerable,’ recalls Savage, who wrote about his experiences in his much appraised book ‘Dancing with the Devil’, which was turned into a two-part television film ‘Answered by Fire.’ 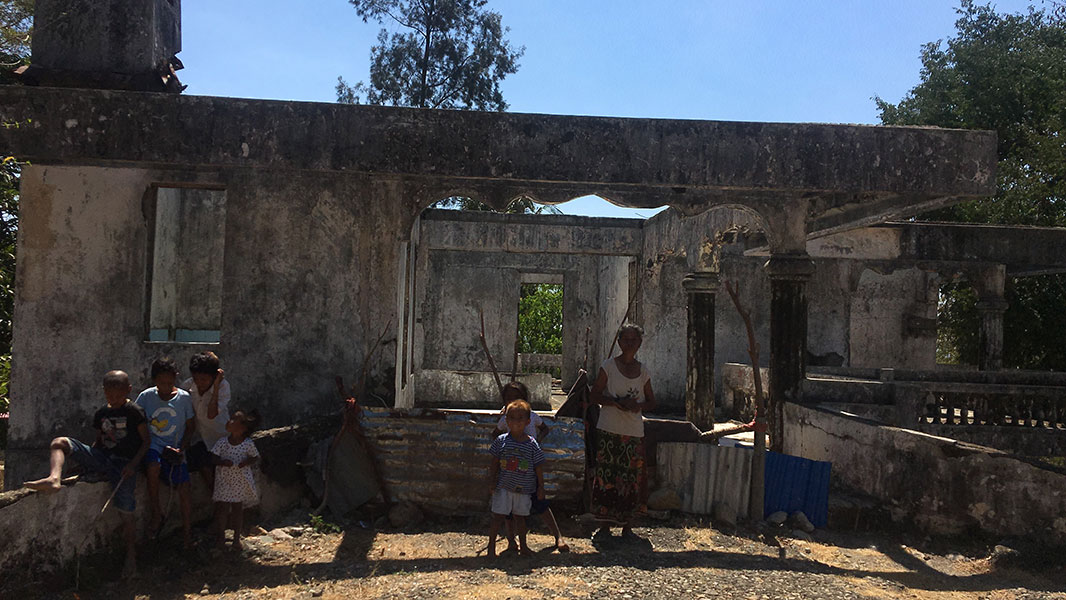 Residence where David Savage and his colleagues used to live in Maliana during the Unamet-mission. The house was burned down in September 1999 and has never been restored. (27 August 2019 - © Tempo Timor)

After the Timorese on 30 August 1999 voted for independence, the Indonesian security forces took revenge and organised a scorched earth campaign that was so massive, that although its promises to stay in East Timor no matter what, the UN broke its promise and decided to evacuate its international staff. ‘Although there were no orders by the UN to evacuate our local staff as well, we said: bugger this, we take them with us. So when we evacuated from Maliana to the UN compound in Dili, we took our local colleagues with us. This was done in all the districts. But we could not take the whole population. So there is the guilt: you are leaving, knowing that you can’t save all the people and fearing everybody is going to be massacred,’ Savage explains. ‘I would understand it if the Timorese would hate us for leaving in 1999. But during this current visit people said they were grateful. It is truly humbling.’

It was important for Savage and the other UN-staff to return to the places where they had worked in 1999 and to meet with families and former local staff. They travelled to Maliana, Bobonaro, Gleno, Balibo and Maubisse. There were so many encounters. ‘When word got out that we were in Maliana, people came from everywhere. The first days we have just been hugging and crying tears of happiness.’ In Maliana he met the current PNTL-commander, whom he knew from before. ‘She was screaming with happiness when she saw us,’ he recalls. Years ago, when Savage had returned to East Timor to work for the serious crimes unit which was investigating the atrocities in 1999, she had been in the first class for a PNTL-training to become an investigator. He still remembers how a group of people in Maliana had captured a militia-man and were about to kill him. ‘But she grabbed the militia and marched him to our office. She said: justice has to be done. Then she handed him over to us. She did the right thing, and we were so proud of her.’ 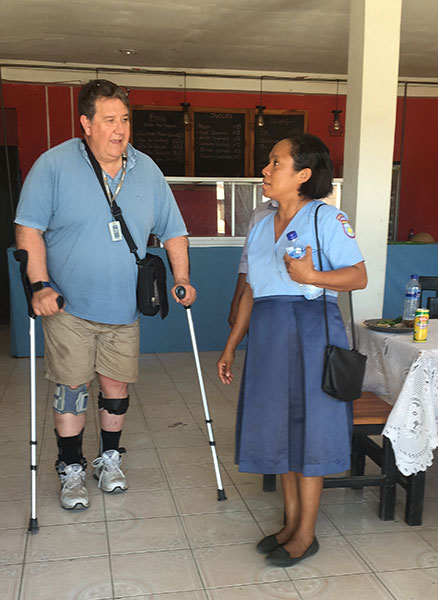 He also met with Dulce de Jesus Soares, the current minister of education. In 1999, being the third assistant of the bupati, she found herself in an extremely difficult situation. ‘She was so important for us. At great risk, just like others, she brought us actual Indonesian government documents,’ Savage tells. Next to the UN-compound in Maliana there was a small kiosk. ‘As internationals we did not know this, but this kiosk was like a post office for the clandestine network,’ he explains. Dulce de Jesus Soares would visit the kiosk pretending to buy something, then slip through the back door, climb over the wall and get to the UN compound to inform Savage and his colleagues and hand over documents. ‘One of these documents was so important that we immediately got in the car and went to the UN headquarters in Dili. Without people like Dulce we would have been clueless. Her information was just crucial to us,’ Savage says. It hurts him to see that she is being insulted on Facebook and accused of having supported the militia. ‘It is the saddest thing of coming back, because it is utterly baseless,’ he explains. Also later, when Savage worked with the Serious Crimes Unit, she helped him. ‘She gave me a very comprehensive statement identifying the persons in the hierarchy in planning the murders. The insults against her are ignorant and malicious. We all know what she did to help us and the Timorese people. She helped to save many lives, including ours.’ 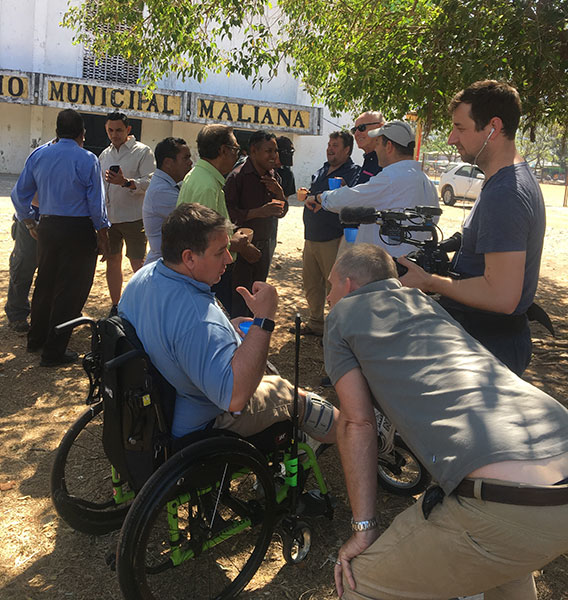 David Savage was not in a wheelchair back in 1999. After East Timor mission he went on other international missions, such as Afghanistan where he worked as a stabilisation officer linking the military to the civil society. There had been threats against him. Other people were warned not to work with him otherwise they would be killed. Then one day late March 2012 a 12-year old child ran towards Savage, who was talking with some other people. Just three meters before the boy reached the group, he tripped and fell. The bomb that was strapped to his young body exploded. The suicide attack failed. David Savage and others were critically wounded, and the boy was killed.

He had 64 ball bearing parts in his body. His brain was damaged by the blast. ‘I did not know my name or date of birth anymore,’ Savage tells. He had twenty operations and is still recovering. ‘I had to start to learn to read, write and speak,’ he says. When he recently met José Ramos-Horta in Dili, the Nobel laureate and former president, minister and prime minister who himself had been the victim of a murder attack critically wounding him, asked Savage how he had dealt with his trauma. Although in East Timor is not wheelchair friendly, the way people approached him has been a relief. ‘In Australia I am often spoken to as an idiot,’ he says. Understandably his family is super careful with him. ‘But in East Timor I am treated as a normal person. I am just David, the guy they know from 1999. The wheelchair is just a detail.’ 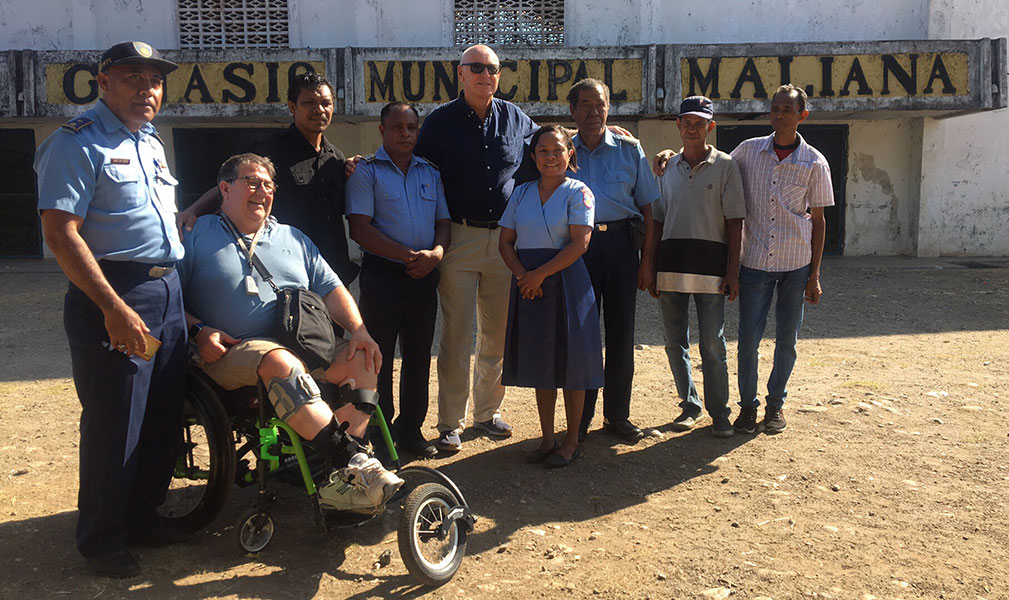 What is his impression of the current situation in East Timor? ‘It’s only twenty years independent. The country comes from a very low base-layer. It has been occupied for over four hundred years and was closed off for so long. The infrastructure was very basic. There is so much trauma. Even if the country had not been destroyed, it would have been a massive task to develop it. Then there was an avalanche of foreigners. Many had the idea: we will show the Timorese how to be a country. But quite some internationals had no idea and made it even worse.’ Savage is quiet for some moments while thinking how to best answer the question about how the country is doing. ‘It could be the hubris of the celebrations for the twentieth anniversary of the referendum, but people seem happy and positive,’ he says.

In a small village he spoke with a family who had suffered a lot during the occupation. While enjoying a cup of coffee the wife said to him: ‘Me, my husband and the children can go to sleep at night without the fear of having the door kicked in at night. When we now go to bed, we know that we will wake up.’ Savage: ‘That constant fear is not there anymore.’

Then he adds one critical note: ‘The roads in East Timor however are in a very bad state.’

Looking back his latest trip he says: ‘Timor is a special place with very special people. I have been in many countries, but I never felt this deep emotional connection as I have with Timor. It’s just genuine.’ It has been an amazing experience for himself, his group and the Timorese he met. ‘Coming together helped all of us. We have been greeted with so much affection and gratitude. It is overwhelming. It helped us to get rid of the demons we struggled with. For us it has been just one strong healing experience. It was the best thing that happened to me in years. Now I am just exhausted from the hugging.’